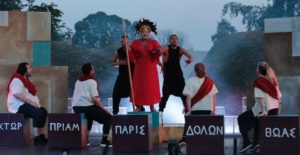 Bampton Classical Opera is a very well-respected and long-established small professional company specialising in rare opera of the later 18th century.  For the past year and more we have been preparing for a staged production of Gluck’s great but little known opera, Paris and Helen (Paride ed Elena), composed in 1770.  This wonderful opera charts the progress of the affair between Paris and Helen when Paris lands at Sparta, egged on by Amore/Cupid;  although Helen does her best to resist, when she eventually succumbs to Paris’ charms, Pallas Athene makes a devastating appearance and warns of the dire consequences of the love affair which will bring about the Trojan War.

Inevitably many of our operas have Greek/Roman themes, and Paris and Helen is steeped in classical references – the original libretto drew on Ovid’s Heroides (an exchange of letters between Paris and Helen), and makes mention of the Judgment of Paris, and Pindar’s odes.  We’ve built in references to Ovid and the Iliad; and there is a brilliant danced Spartan gymnastics display.  It is a most entertaining production, sung in a new and sparky English translation, and would make an ideal introduction to anyone unfamiliar with opera.